To join the class, please follow the link below:

To be prepared for Monday’s class, I would like you to download the Effective Speaking Cadet Workbook .

Read the first two pages and complete the first assignment.

Be sure to follow the framework as shown on the page 2 of the cadet workbook.

I am looking forward to seeing you on Monday and hearing your first speech!

Have a great weekend!

Hey 809….We’re looking to you to become designers of some funky, maybe practical, but also fun paper airplanes. We’ll be reviewing them on a Zoom meeting on Wednesday, May 6. We’ll pick out winners of 3 categories..

1/ Most realistic design….WW2 warbird…Canadian Forces Aircraft….Civilian Airliner….Whatever. Design and build a paper airplane model.  Colour it so that it looks as realistic as possible. Don’t worry about flight on this. It’s the look that counts.

2/ Most Fantastic Funky Fliers… Go all out with a crazy design. Take something from a movie….a cartoon… or just from the top of your head. Design something spectacular to show off. If it flies…well bonus.

3/ Best practical design. This is where we put together a paper airplane that’s born to fly. The airplane with the best flight characteristics gets the heads up on everyone in this category.

809 will get together on Wednesday May 6 at 1900 via Zoom (invitations will go out to take part).   Here you can show off your creation, talk about your influences and show how much air your flier can get.  Send me your email addresses so I can send you an invite.

We’d like everyone to take part.  Even if you’d prefer being an observer.  Let me know.

Have fun with this and bring your A-game.  Show the squadron who the best of the best is. 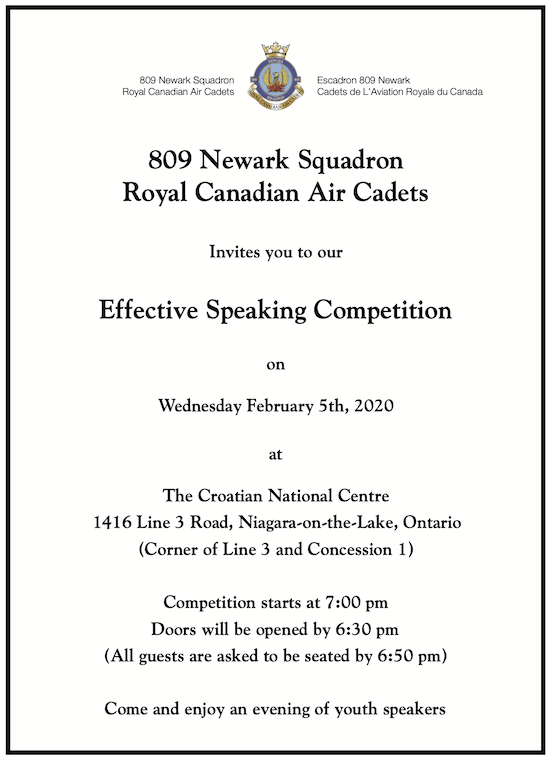 It’s an exciting week for competitions! On Wednesday, we have our annual Effective Speaking Competition and on Saturday, we go to Cayuga to compete in the Niagara Air Group Sports competition. It’s a great kick-off for an exciting February.

Further details about the NAG Sports Competition will be posted before Wednesday.

Mrs. Gowans asked me to remind you about effective speaking next week. Go over your workbooks and have a 1-1/2 minute prepared speech ready for Wednesday night’s class.

Have a great week.

After last week’s tryouts, the 809 Marksmanship Team for 2019 has been selected.

Kudos to all of the cadets who competed for a spot on the team and congratulations to the final members!

The team will be practicing with Capt Palumbo and CV Carbone for a full two hours tomorrow night at the Old Virgil School Gym at 1665 Four Mile Creek Road. This practice is exclusively for the team in preparation for the Zone 7/8 competition on Saturday. Members of the Marksmanship Team should arrive at the front doors of the school no later than 1845 (6:45pm) for setup and should be picked up from the same location at 2115 (9:15pm).

The Zone 7/8 Marksmanship Competition will occur at the Lake Street Armoury, 81 Lake Street, St. Catharines on Saturday, 2 Mar from 0800 (8:00am) to 1700 (5:00pm). Parents should drop their cadets off and pick them up from the competition site. Lt Russell will be supervising the team at the event.

Full details for the competition can be found in the operations order here: NGTA Marksmanship Op Order 2019.

Last night’s effective speaking competition was a great success! Thanks go out to Mrs. Gowans for her ongoing efforts over the last few months helping our cadets to prepare for the event. Thank you to our volunteer judges, timers, and tabulator, our MC, and our participating cadets. On the other hand, there will be no thanks whatsoever to the chaotic weather that cancelled our competition once and almost did so a second time too.

For those of you who weren’t fortunate enough to be able to attend, I can say that every speaker did an excellent job and that I didn’t envy the hard decisions that our judges had to make. In the end, our winners were as follows:

There was a bit of a mix-up last night and we failed to include Cpl Abt in the winners’ announcement. We were in a bit of a hurry and took the top three cadets on the score sheet, but didn’t realize until later that the fourth cadet on the list had the same score as the third one. Apologies have been extended and accepted. We’ll endeavour to be better next time.

The upcoming regional Wing 10 Effective Speaking Competition is tentatively happening in Grimsby on the 30th of March. Unfortunately, with the increased number of squadrons participating, we can only send one cadet to the regional competition. Best of luck to Cpl Forsyth as he represents 809!

This week’s summary is largely the same as last week’s. The weather may have halted things for a night, but we’re picking up where we left off. Hopefully, everyone managed to stay safe and warm.

On Wednesday, we’ll once again attempt to hold our local Effective Speaking Competition and have invited the community to attend. Time permitting, there will also be a CO’s Parade at the end of the night.

For those cadets participating in the Effective Speaking Competition, don’t forget to bring your completed competition form with you on Wednesday.

This Monday night will be split between effective speaking preparation from 1900h-2000h (7:00pm-8:00pm) and drill team practice from 2000h-2100h (8:00pm-9:00pm) for this week, but will switch to Drill Team practice and Marksmanship Team practice beginning next week.

On Wednesday, we’ll be having our local Effective Speaking Competition and have invited the community to attend. Time permitting, there will also be a CO’s Parade at the end of the night. Lt Russell will be handling the evening as I’ll be away on business for the bulk of the week.

For those cadets participating in next week’s Effective Speaking Competition, Mrs. Gowans has asked me to remind you to bring your completed competition form with you on Wednesday.

In other news, we’re only two weeks out from our Cadet Youth Development Centre aviation weekend! I’m getting excited already and you should be too!

To all parents, guardians, friends, and supporters of our cadets:

invites you to our

The Croatian National Centre
1416 Line 3 Road, Niagara on the Lake, Ontario
(Corner of Line 3 and Concession 1)

Come and enjoy an evening of youth speakers