From the Ontario Cadets Facebook page, for cadets attending vCTC and CAP programs this summer:

‼️ ATTENTION HIGH SCHOOL STUDENTS ‼️
☀️ Back by popular demand, the Upper Canada District School Board (UCDSB) will be offering their high school credit co-op program for all #OntarioCadets again… but this time, the summer version!
🌐 Make sure to visit the UCDSB website for additional info and to register for this great opportunity: http://www.ucdsb.on.ca/programs___initiatives/school_programs_k-12/summer_semester_programs/summer_semester_cadet_coop 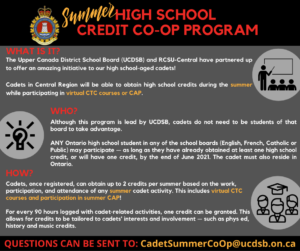 The Google Meet link for the prep session has been posted in the Level 3 and 4 Classrooms.

The refresher starts at 10 am and goes up until around 1:30 pm. Please be punctual and log in the latest 5 minutes before the class. Be ready to ask questions, 2 Lt Silva will be happy to answer them all.

WO1 Abt will be present, please refer to him if you need assistance of any kind.

Good luck and have a great long weekend!

A year end message from our outgoing commander, Commodore Kurtz, and CPO1 Bliss.

How could I miss this one.  May 1945, Canada liberates Holland from the German army. To this day, Canada and Holland have a special relationship.

This weekend was packed with special days to be observed.

WW2 – Germany Surrenders
On May 7, 1945, Germany surrenders to the Allied armies at Reims, France. Leading to the end of WW2 in Europe

May 8, 1945 – Victory in Europe Day,
This day marks the official end of fighting in Europe in World War 2. More than 1million Canadians served, with 42,000 killed, and 10’s of thousands more wounded.  The war wasn’t over yet, however.    Fighting would rage on in the Pacific against Japan for another 3 months.

Happy Mother’s Day, 09MAY21
A special shout out to everyone’s mom. Without any of you, we wouldn’t have the squadron we have today. I hope your cadets, or adult children (officers, CI’s & volunteers) for that matter, did something special for you today.

So, some things to think about.   Hope you enjoy the rest of your weekend.

Little late on this one, but bear with me.

To the best of my knowledge there are 3 big milestones this week with regards to our Military:

1/ In Flanders Fields, the poem we’ve all grown to know well as symbolizing the remembrance of our fallen soldiers, was written on May 3, 1915 by Lieutenant-Colonel John McCrea of Guelph, Ontario. He was inspired to write it after presiding over the funeral of a friend of his, and fellow soldier, Alexis Helmer during the Second Battle of Ypres during World War 1. “In Flanders Fields” was first published on December 8, 1915 in the London magazine “Punch”.
More on the history of this important poem can be found here:

Battle of the Atlantic

That’s it for now. See you all Wednesday night. And, before I forget, May the 4th be with you.

Hello, rocketeers! On Saturday May 1st at 3 PM, come down to the SQN to drop off your orange model rockets that you made during the last session. If you cannot be there at that time, let me or CI Dau know by email and we can organize a time to pick it up. 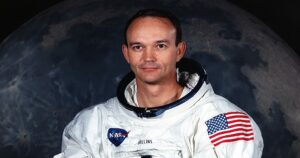 Michael Collins, the NASA astronaut who was the command module pilot for the Apollo 11 mission to the moon, died today at age 90 after battling cancer.

His family shared the news Wednesday after his passing on Collins’ Facebook page. 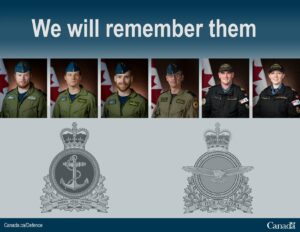