The day was interrupted for an impromptu selfie with LCol Evans and CWO Hill (from Regional Cadet Support Unit Central in Borden). LCol Evans commented on our 809 T-shirts (well done CI Thiffault!) and said she would like one as well – we will send her and CWO Hill their very own this week. 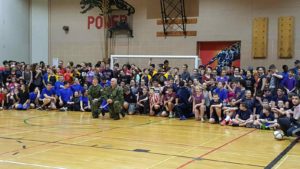 Our volleyball team remained undefeated for the ENTIRE day – until the championship match against 62A. You can imagine our distress when it came down to a tie-breaker. At one point 62A was up 6-0 then 16-8. But our team pulled together and tied it up to 18-18! A final two serves and we were victorious! And there was much rejoicing. 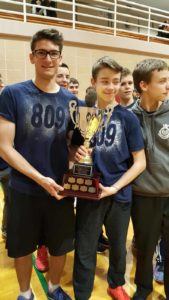 CONGRATULATIONS to all our players. It was a great day – hope you’re getting some rest today!